Our experienced and passionate team is always here to help you. 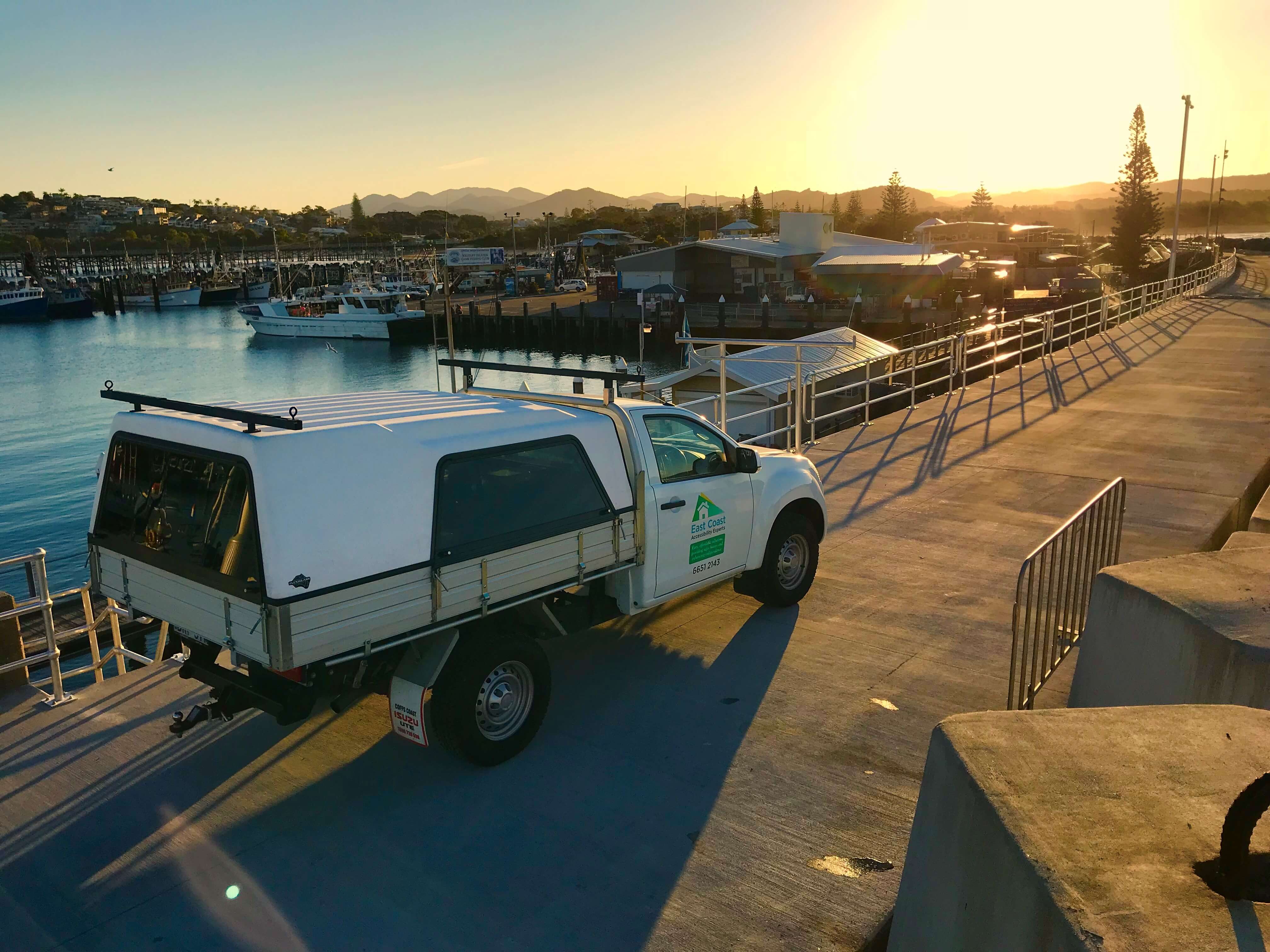 We’re a not-for-profit community service organisation made up by a diverse group of individuals who work together to ensure we deliver the very best service for our clients.

We believe home is where the heart is and consider it our priority to make your home & business as safe, comfortable and accessible as possible.

Our Board of Management consists of six members (four Executive & two Ordinary) endorsed through relevant declarations and commitments to hold these roles. All Board of Management are encouraged and do attend available training in their legal responsibilities.

We have reviewed our Constitution under the Associations Incorporation Act, 2009 and review this annually to ensure it continues to be relevant;

Our Annual General Meeting is held in October of each year. 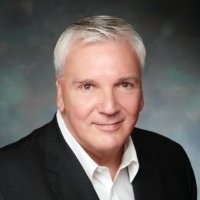 Gordon has a highly accomplished professional with 15+ years senior-level success driving local and international business development. With a track record of successfully developing business operation strategies in various countries, Gordon possesses a history of delivering effective marketing and business strategies, his time in different countries has exposed him to various cultures, advanced his business acumen, and developed his ability to quickly adapt to situations.

Gordon is an energetic and detail-oriented professional with much expertise. Among his many talents is the capacity to effectively complete both client-side and supplier-side functions, optimise business opportunities and manage key accounts. His interpersonal skills and excellent communication skills assist with forging long-lasting stakeholder relationships. In turn, this promotes portfolio performance, customer satisfaction, and customer retention.

His reputation as a results-driven leader with an ability to coach, motivate, and facilitate teams in delivering desirable outcomes in alignment with corporate goals is showcased throughout his career. 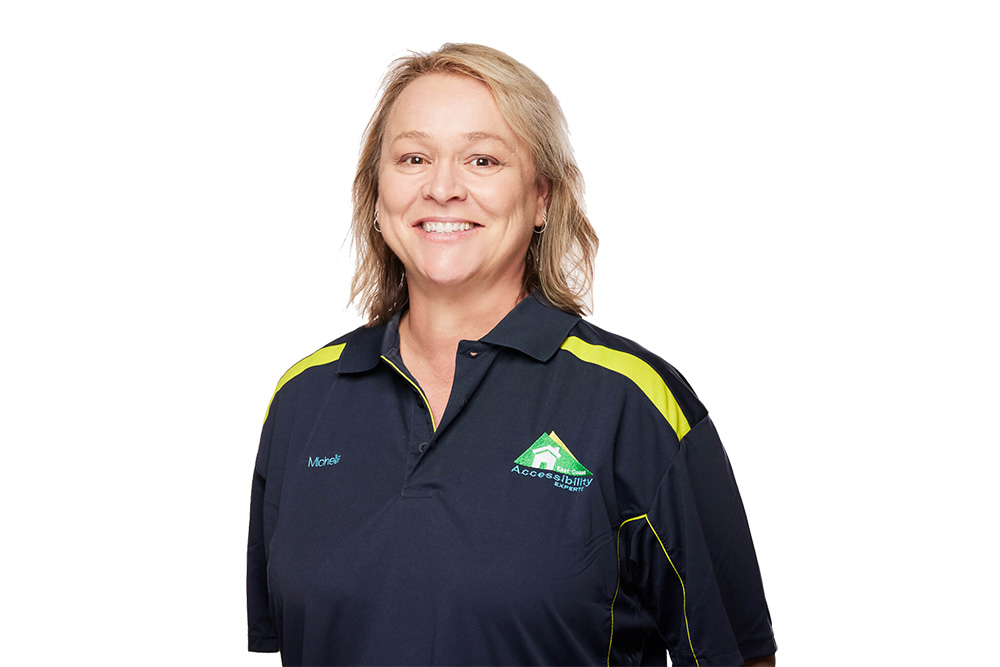 Having moved around a lot over the years, Michelle has been settled in Coffs Harbour for more than 10 years and plans to stay forever (a move to the South of France running her own cheese business will be dependent on a lotto win.

With a Distinction in a Bachelor of Business (Marketing), four musically talented children and a hugely diverse career (cafes, catering, singing teacher, musical performer, Family Day Carer, Disability Carer to name a few), Michelle has the experience weather any storm for our clients.

Michelle enjoys being part of a story that helps people in need to live the best life they can, even if it’s only in a small way. She enjoys cooking, cross-stitching, travelling, being in nature, laughing with friends & comedy. 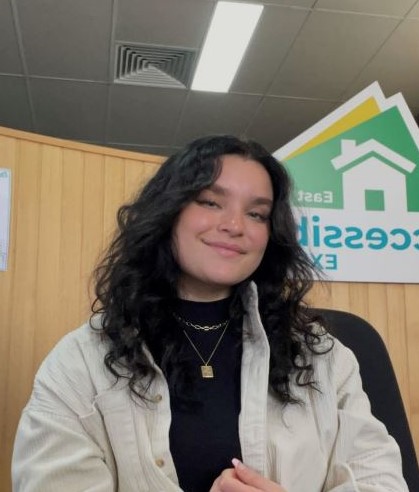 Kiarra was born and raised in Coffs harbour. At 19 years of age, she has a plethora of knowledge in the building and insurance industry after working as a Claims Operations Coordinator prior to joining us at Accessibility. She has multiple, accounting, business and bookkeeping certifications and loves the building and construction environment. Kiarra has a passion for people and loves connecting with the community, she aims to approach everything she does with a smile and strives to offer a helping hand wherever she can.

Being active is a big part of Kiarra’s daily routine. She likes to get up early to head to the gym, drive to the jetty for a quick swim, or take her dogs for a walk…..that’s all after she’s had her cup of coffee. 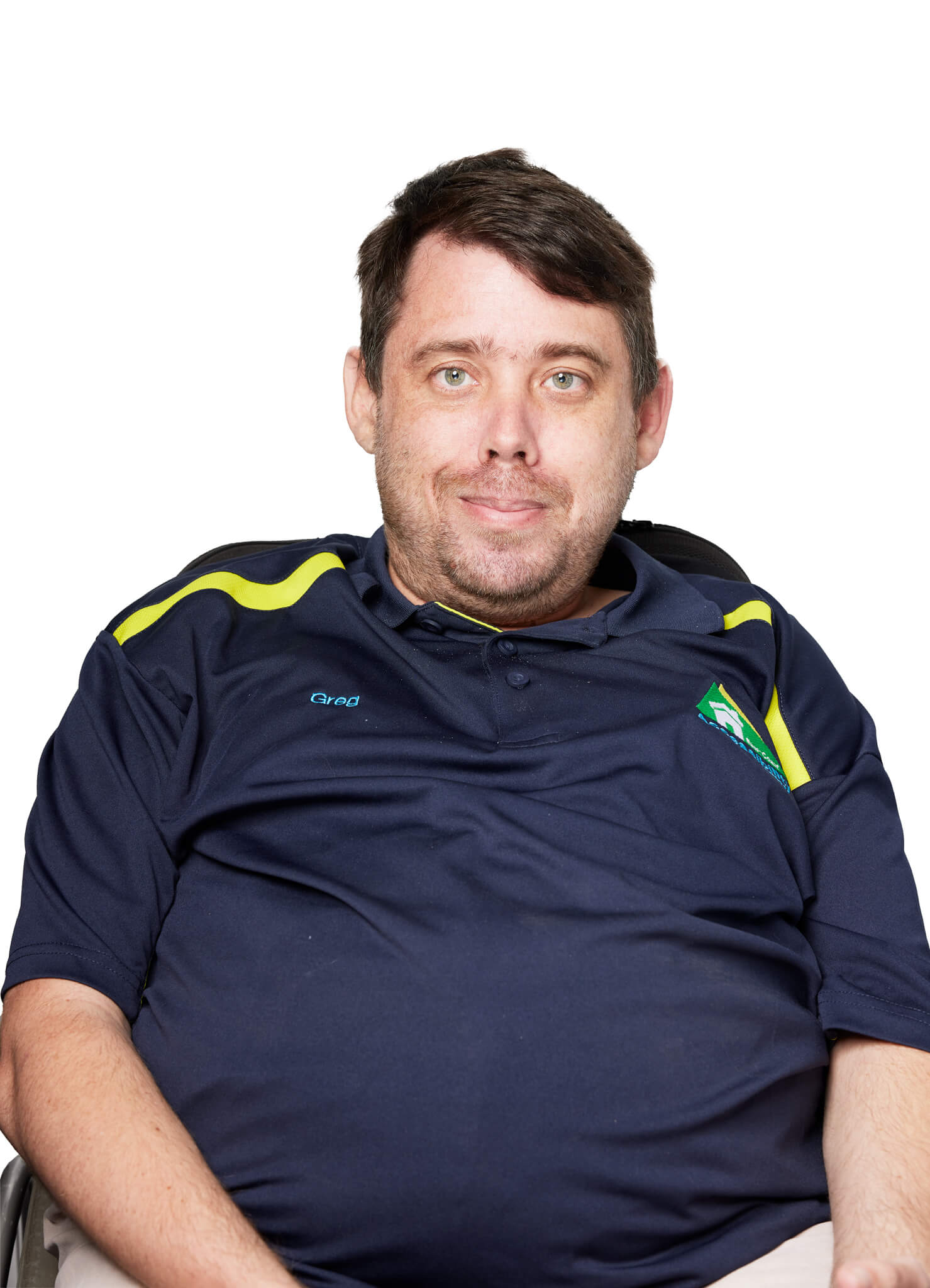 Greg moved to Coffs Harbour from Broken Hill in 2011 and has completed a number of courses at TAFE, including Certificate IV Web Design and a Diploma in Business Administration.

Greg joined our team in early 2017 as our marketing assistant, bringing a wealth of knowledge in social media and website management to Accessibility Experts. 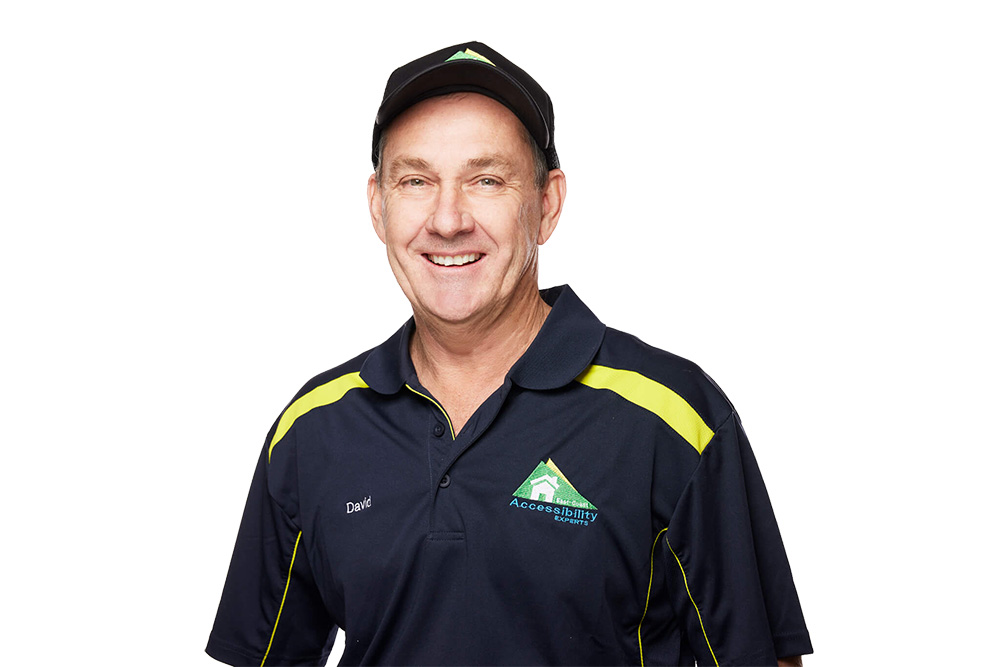 David stands by his grandfather’s words “No such thing as problems, only solutions”. With over 30 years in the building industry there aren’t many problems David can’t solve.

David has been part of the Accessibility Experts team for 8 years and enjoys helping people and solving problems.

David says his family is the most important thing in his life closely followed by his love for the great outdoors where he enjoys fishing, boating and camping. 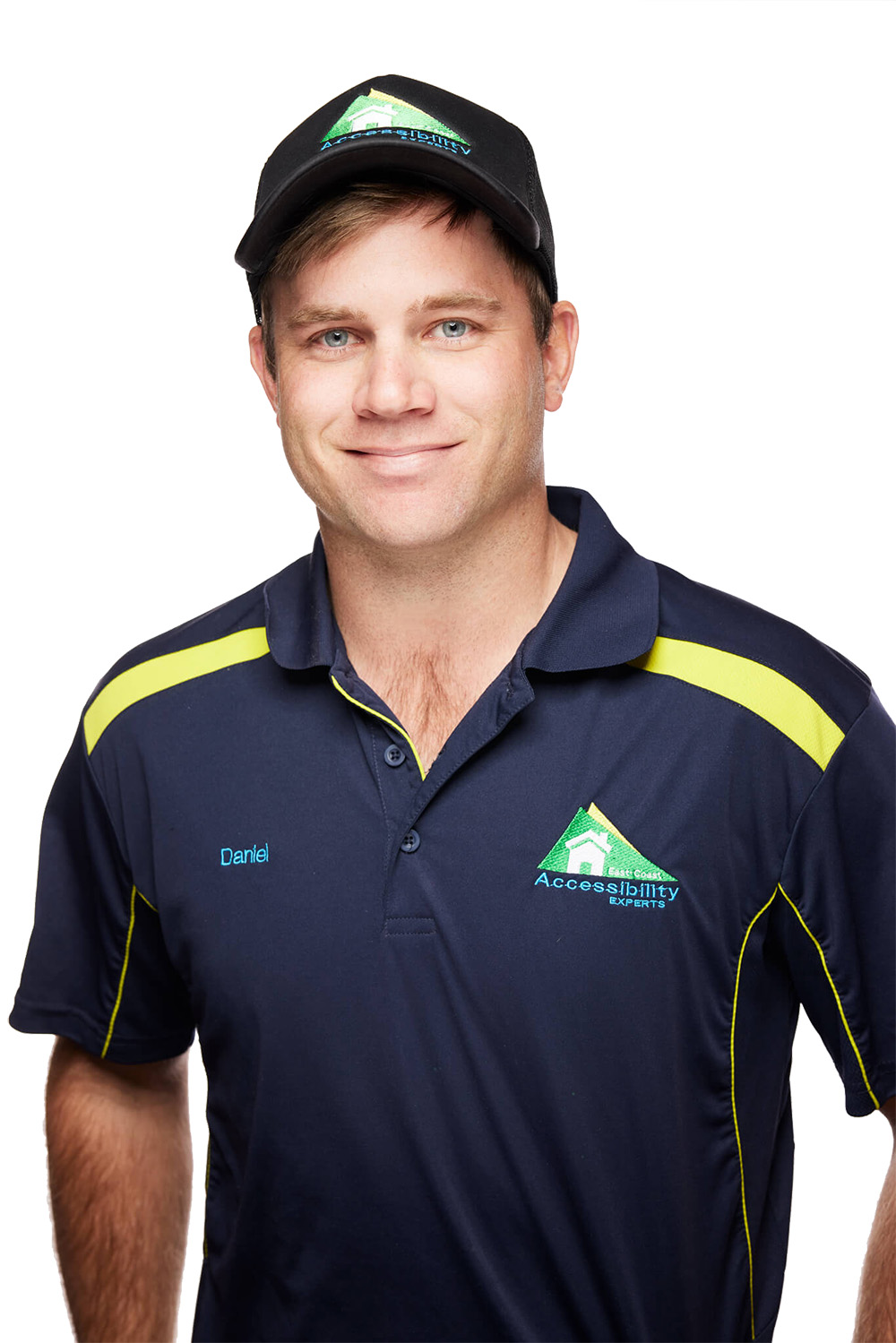 One of the members of our construction team, Daniel was born in Tamworth but now enjoys the coastal lifestyle that Coffs Harbour offers.

Daniel has completed his Carpentry apprenticeship and has been a part of East Coast Accessibility Experts for years.

Outside of the workshop Daniel’s interests include surfing, travelling, camping and fishing. 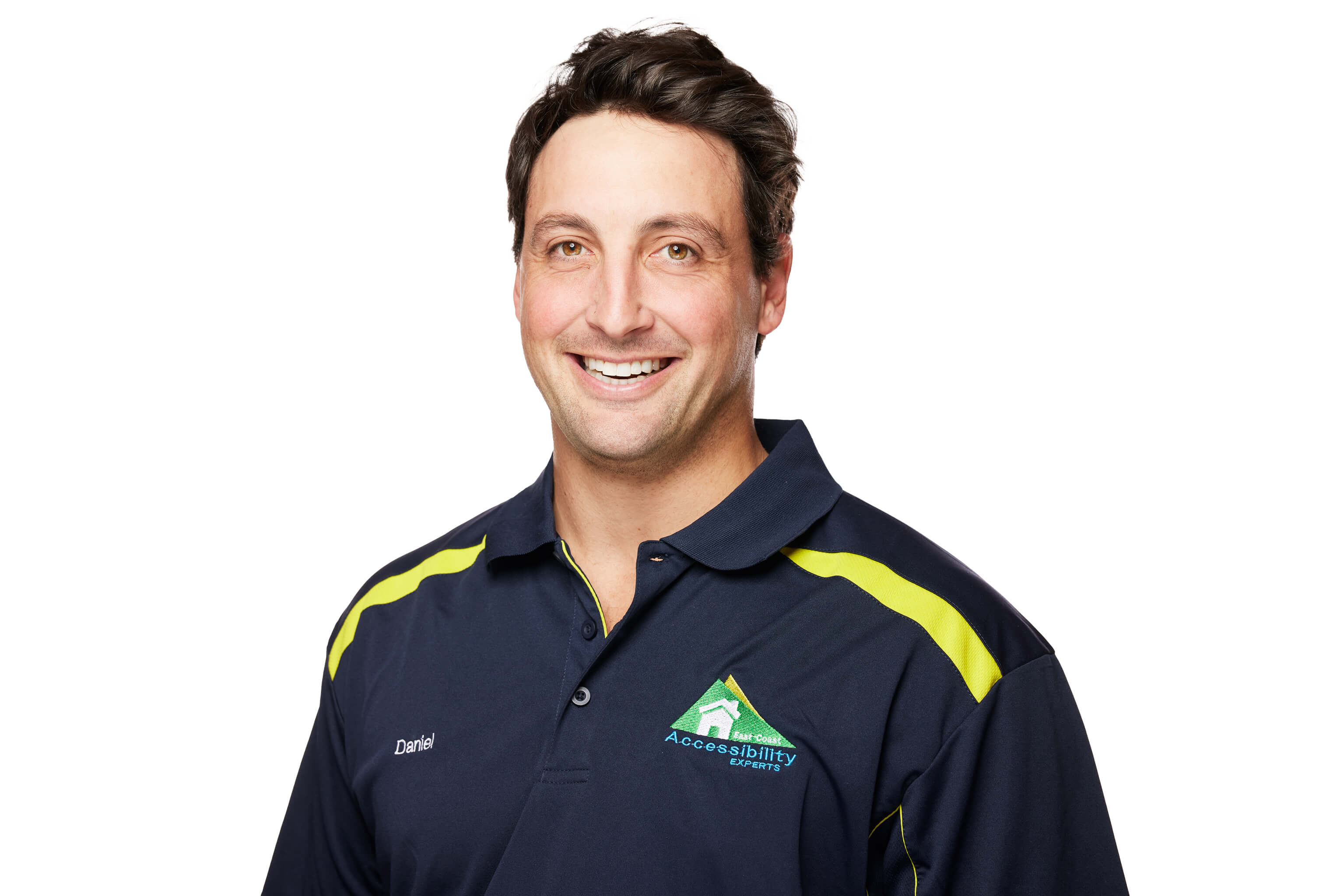 Married with a young family, Daniel grew up in Grafton and lived in Grafton before moving to Coffs Harbour and joining the Accessibility Experts team in 2013.

He has been a carpenter for over around 15 years and enjoys working in the building industry. Prior to joining our team, Daniel’s previous work included building new homes, extensions/renovations and bathroom renovations.

Daniel enjoys sport and can be found both watching and playing all types, particularly golf, rugby & cricket. 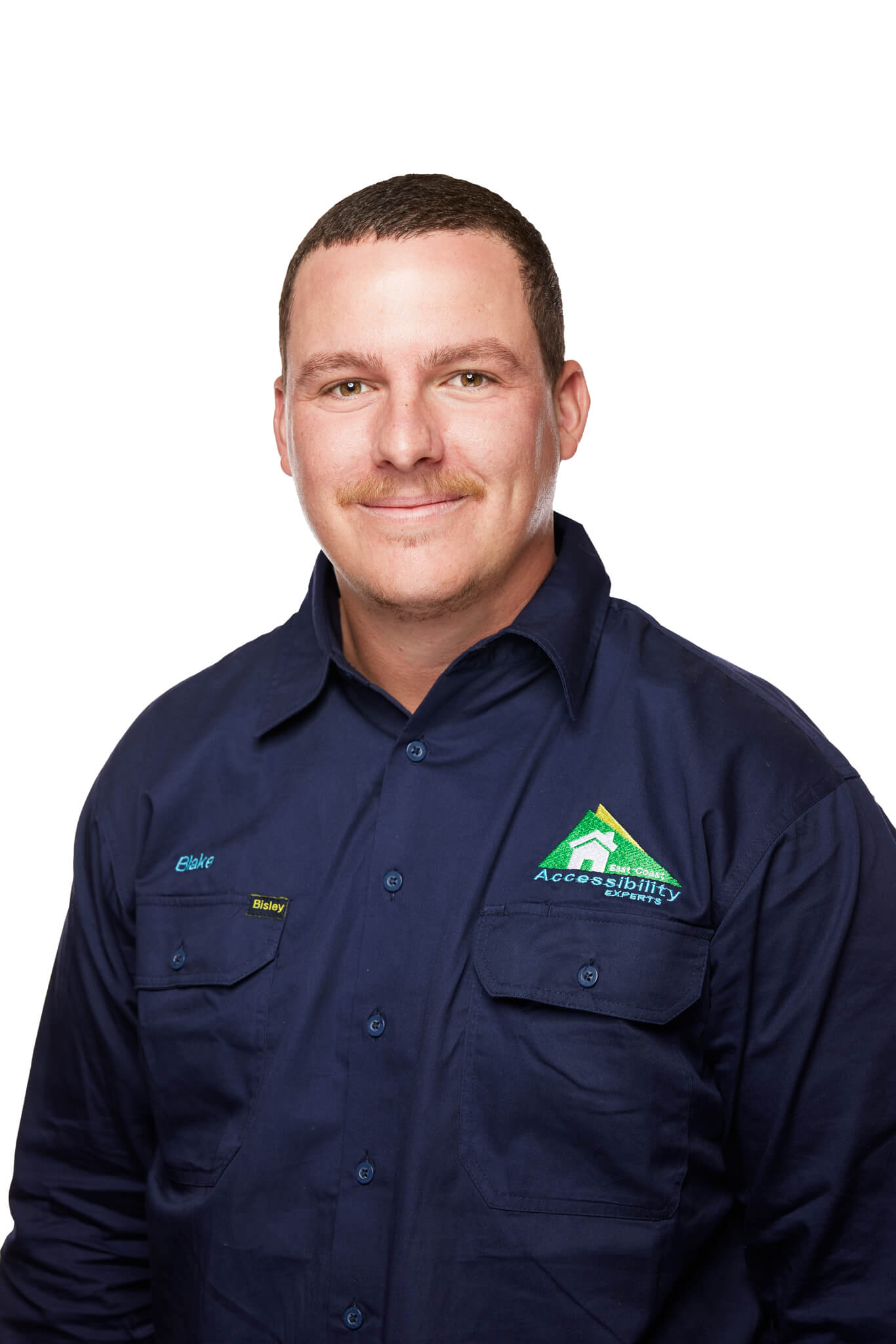 Born in Melbourne, Victoria, Blake has lived on the Coffs coast for the majority of his life. An experienced and qualified carpenter, Blake has also completed a Cert V in Building and Construction.

"I love helping people and hope I can continue to make a difference in the organisation." 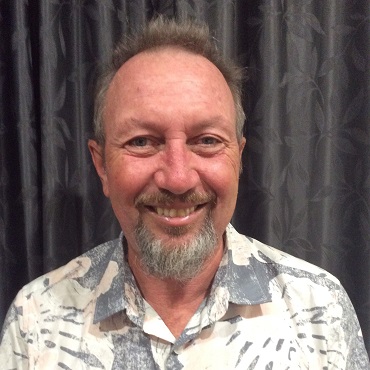 Terry has an extensive history working with public housing having worked for more than thirty years in housing administration, planning and operations.

‍
Experience in policy and planning for state initiatives, working extensively in Sydney operationalising policy in relation to housing services for older people as well as product development. 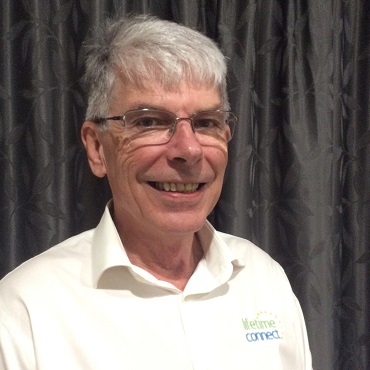 Paul has worked in the community sector since 1979 when he commenced work as a youthworker in North Queensland.

‍
He is currently employed by Lifetime Connect as a Community Development Coordinator in the Nambucca Valley.

‍
Paul has had an active interest in Home Modifications since 1993, serving on various panels and committees at a state and regional level. 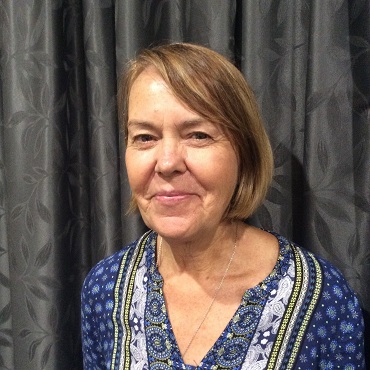 ‍
Stephanie has around 15 years recent experience in management of community housing program planning and administration in a regional state government context.

‍
Stephanie has most recently undertaken some project work to support capacity building in the indigenous community housing sector, and to support the implementation of Local Area Co-ordination of the NDIS 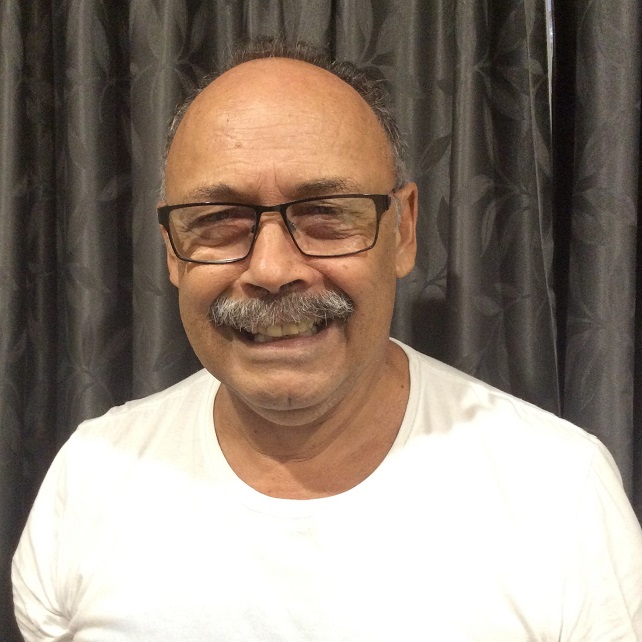 Ken Craig was born and raised in Coffs Harbour. His father was a Gumbaynggirr/Yaegl man and his mother is a Bundjalung woman – he comes from a large family that is one of the oldest in Coffs Harbour.

‍
Ken has dedicated a lifetime to improving housing outcomes for Aboriginal and Torres Strait Islander people across NSW, retiring in June 2015 after 32 years in Public Service. In 2013, in acknowledgement of Ken’s work in the housing sector, he was awarded a Public Service Medal (PSM) by the then Governor of NSW, Marie Bashir.

‍
As the Northern Regional Manager of the Aboriginal Housing Office, Ken was instrumental in leading his team to improve Aboriginal living standards by implementing programs that aim to build the capacity and sustainability of the Aboriginal community housing sector.

‍
Working as an Associate with Moreton Consulting, Ken has also been involved in a number of projects including the Kempsey Aboriginal Ageing Strategy, supporting the Coffs Harbour and District Local Aboriginal Land Council and supporting Many Rivers Regional Housing Management Services Aboriginal Corporation.

‍
Ken has undertaken many professional development activities and his qualifications include a Graduate Certificate in Housing Management and Policy and an Advanced Diploma in Government. 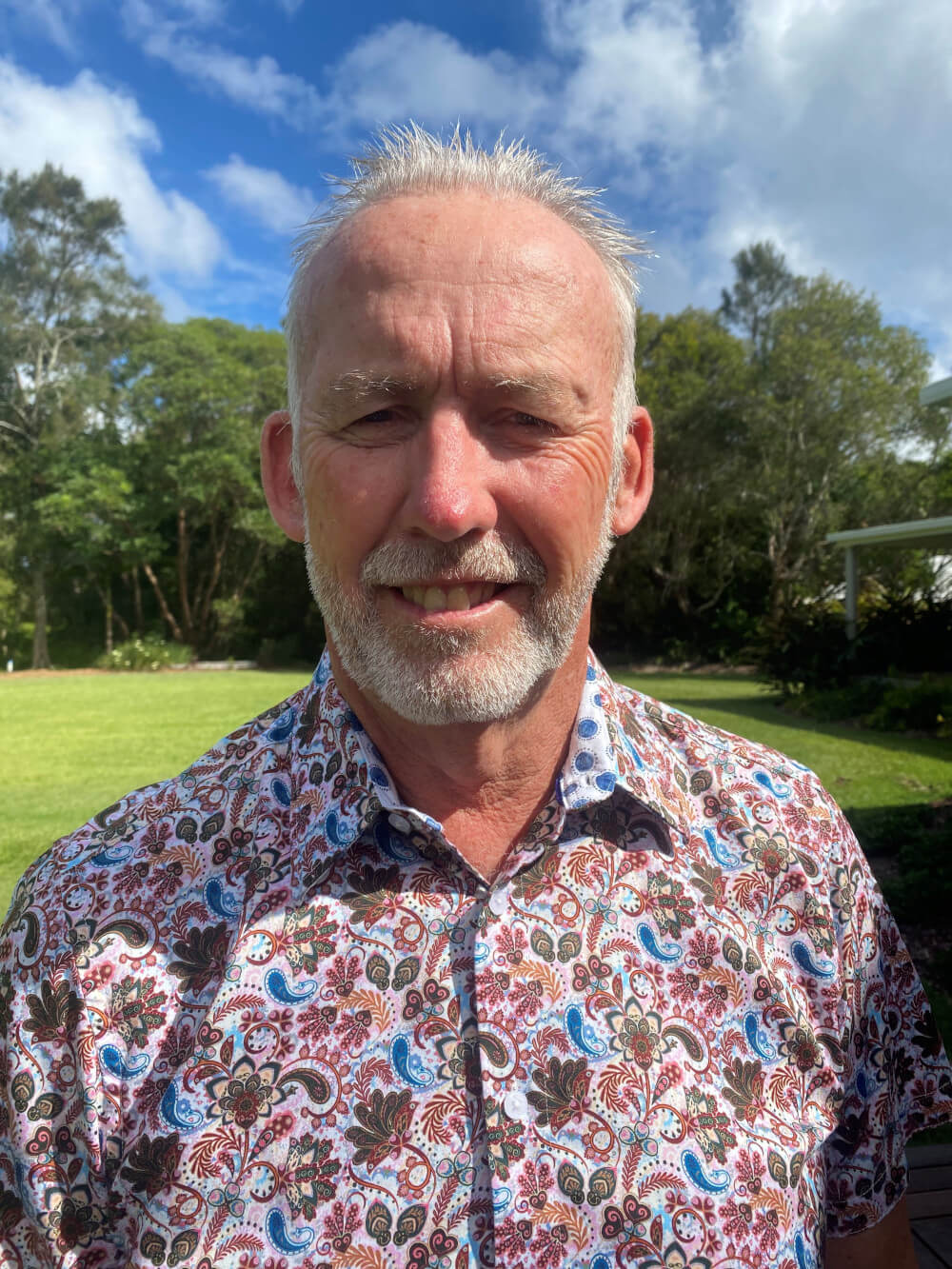 I grew up in Coffs Harbour attending Coffs Harbour primary school and then Coffs Jetty high school. I went to university in Sydney and graduated with a BA LLB.

I returned to Coffs Harbour in 1985 and was a partner in the legal firm Fishburn Watson O’Brien until I retired in 2020.

I acted as honorary solicitor for a number of Aboriginal Land Councils, sporting clubs and NFP organisations. 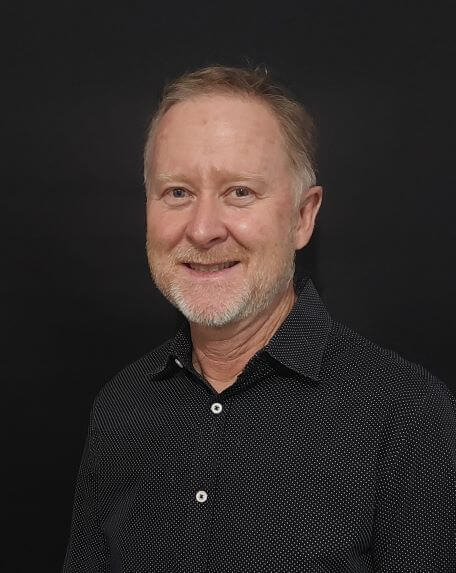 Mark is an outcome focused professional with an extensive career in Asset Management, Business Operations and Projects Management.

He has held senior roles with in Government and NGOs as a Project Director, Asset and Capital Works Managers. He has held responsibilities for the Strategic and Operational Management of Assets within Health and Housing portfolios.

Mark has worked Internationally with Redr Australia and Federal Government as result of the 2004 tsunami. Responsible for development and delivery of major humanitarian projects, including reconstruction of major projects and infrastructure.

Mark has completed a broad range of professional development activities with qualifications in Business Management, Facilities and Asset Management, Project and Contract Management, Construction, and Logistics. He has been a Licensed Builder, Advance Building Construction AFE Teacher and Licensed Valuer.

He has a reputation as a Leader focused on strategy and achieving planned results.

We host all sorts of fun and interactive events & classes. Usually held on our premises, these are a great way to keep active and meet new people.

No items found.
View all classes and events

I just wanted to let you know how happy I am with my new steps, the workmanship and the respect shown to me by all concerned. I am now venturing outside every day without a problem and Max loves the steps too. Thank you all so much.